The irony was lost on US News & World Reports.

Whether the rise of social media represents the tech sector’s latest bubble and whether that hypothetical bubble has already burst are topics that are rising to the top of online discussions. The print media couldn’t be more delighted to report on the subject, as social media continues to threaten the paradigm of organized news providers at large. But what caused this so-called bubble to expand in the first place? What makes social media preferable to the forms of media we had before? And are those advantages sustainable? Continue reading ►

Most would agree that the initial allure of social media stemmed from the intimacy of it and its focus on the individual. No longer presented with only a handful of sources for our information, we could now listen to sources that we trust, and moreover, contribute to the discussions ourselves bidirectionally. The individual finally had a voice that could be heard on a scale that approximated major media outlets. Like much of the early internet, designs and delivery channels were heavily flawed, but early social networks such as LiveJournal and Myspace had a unique charm to them (provided you happened to be a fan of whatever nu-metal band came blaring through your speakers whenever you went to visit a friend’s page). Early social networks weren’t perfect, but they were “cozy,” and the news people received (though amateur) was heavily personalized to their tastes. However, it wouldn’t be long before the corporations descended on the medium in an attempt to reclaim their throne.

While early corporate events to penetrate social media and purposefully establish viral trends met with hilarious disasters(such as Sony’s “All I Want for Xmas is a PSP” promotion, where a contracted marketing company attempted to portray themselves as quirky rapping teens), best practices were soon established, and major media providers and advertisers slowly began to settle in. Social media today is infested with sponsored messages and has a distinctly “corporate” edge to it, which many argue is cannibalizing the medium and promoting its decline. 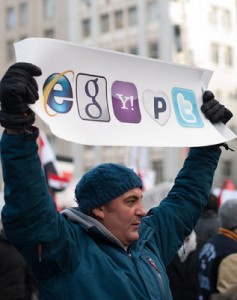 But was social media ever really as good for individuals and small businesses as people remember it being? Many of us have fond memories of early social media the same way we can romanticize the cacophonous symphony our modems would perform en route to connecting to it, but retrospectives on social media as an opportunity for small business seem toobjectively argue against its viability: “I’ve paid thousands; show me the new customers,” cried America’s mom-and-pop stores. Australian businesses recently reported a 24% rate of success with social media, and a 12% rate of loss.

Perhaps the wrong questions are being asked and social media is simply misunderstood. There’s no denying that social media has been tremendously effective in empowering individuals, as evidenced by civil unrest depicted and organized on Twitter in Egypt and Iran. So why do many corporations fail to harness that same power for far less ambitious (and far less humanitarian) goals? Social media appears to live up to its namesake; it is a servant of society, and protects society from the companies that would seek to exploit it. The only bubble that is bursting where social media is concerned is that of the fantastical expectations of corporations that sought to intrude into the internet’s living room and set up shop. Kevin Jones from eLearn Magazine summarizes the result quite succinctly:

“If you want to fail, underestimate the power of culture.”